Everyone and their Mother knows Irish blogger Suzanne Jackson (or So Sue Me) at this stage, she has become a massive success in the past few years. So a few months back when Suzanne announced that she was about to launch her own ‘Complete Contour Palette’, there was obviously going to be a huge demand for it. Like many people, I’ve been following So Sue Me since near the beginning, and I was so excited to try out the SOSU Contour Palette. But it definitely proved hard to get! It sold out so quickly when it was first launched (impressively quick!) and each time it was re-stocked, it sold out just as quick. When it was re-stocked last week, I went online to buy the palette and again, sold out! Luckily, I was in Sam McCauley’s chemist the next day and it caught my eye, so obviously, I had to buy it then and there! I got the third last one in the shop, and obviously, after it being so hard to get my hands on, I was dying to get home and try it out. I was actually scared that because the palette was so hyped up that it wouldn’t be as good as I expected. 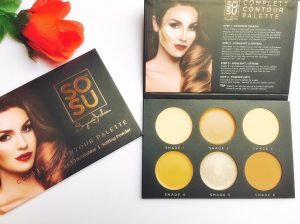 The palette has three cream shades, a light medium and dark, a cream highlight and two powder shades, one light and one dark. When the palette launched, Suzanne mentioned on her blog that it is suitable for all skin types and that it is both cruelty-free and paraben-free. My first impression of the palette was that it was smaller than I expected, but then really I had only ever seen pictures of it online and never paid attention to the actual size of the palette – I had just assumed that it would be bigger. But really, that didn’t bother me, it’s actually a perfect size for bringing it around in your handbag if you like. Here’s a picture of the palette next to my hand, just to show the actual size of the palette. 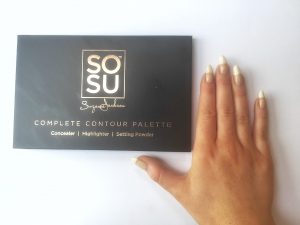 Another one of my first impressions before I actually tried the palette itself was that the packaging was gorgeous, I love gorgeous packaging and even just that it was designed in black and gold I fell in love – who doesn’t like black and gold together? It’s also super handy that there’s a guide on the inside go the palette to show where each shade goes, so if you’re not too sure about contouring there’s a perfect guide on the inside of the palette. 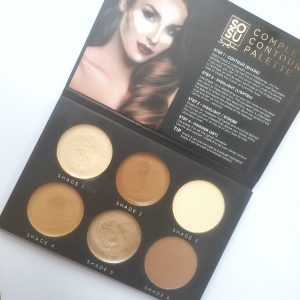 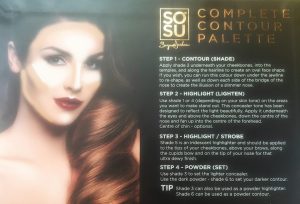 How perfect do the shades look? Yes, I used it before I decided to take pictures, I couldn’t wait ha! I didn’t really have a palette to compare this to, the only cream contour palette I had tried before actually turned me off cream contouring for a while, that certain palette just didn’t work well for me at all. I only began cream contouring again with really creamy concealers because I wasn’t sure about the palettes at all! So, apart from the concealers I’ve been using for cream contour lately (NYX HD Concealers), I had nothing to compare it to other than the disaster palette. So I tried to keep an open mind, rather than comparing it to the other palette. Anyway! About using the SOSU Complete Contour Palette… 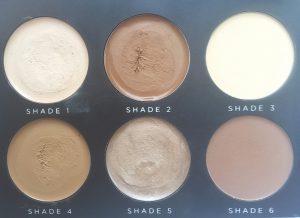 When I started applying the cream shades, the first thing I noticed was how creamy and smooth they went onto the skin, I was so impressed and I was only just applying it. I applied Shade 1, 2 and 5 and they all went onto my skin so smoothly and blended out perfectly too (I used a beauty blender for this) so far I was so impressed. Here’s a swatch of the cream contour shades in the palette, from the bottom – Shade 1, Shade 2, Shade 4 and Shade 5. 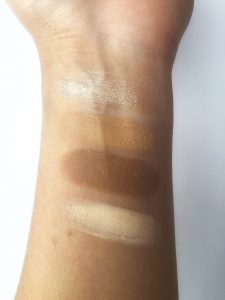 Then I just set the cream contour with the matching powders, I put a bit of extra highlighting powder over the cream too – I can’t get enough highlight 😀 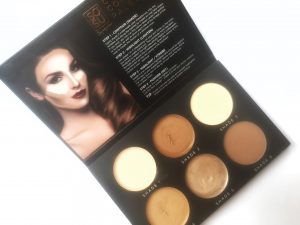 I’ve used the palette a few times now and I’m really loving it. The cream highlighter is so gorgeous and the shades are spot on for contouring, they’re all so smooth to apply and easy to blend – although I did realise that the highlighter was a bit more difficult to blend – but maybe that’s just me?

I also found that for me, Shade 2 for contouring was a bit too dark for daytime but perfect for night time. So I’m glad that Shade 4 is there if I want cream contour for during the day. Or else a bit of both! The contour shades are so pigmented, so you really only need a small bit at a time. I learned this the hard way because I got way too overexcited the first time I used it ha! Here’s a pic of my makeup after I was finished playing with the palette… 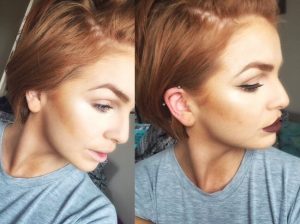 Another great thing is that Shade 3 and Shade 6 are actually great for eyeshadows too if you’re in a hurry. I’ve also heard of people’s using some of the cream shade for foundation, so you have almost everything in this palette apart from mascara and brows (or maybe Shade 6 could even be used to fill in brows…)

Overall I absolutely love the SOSU Complete Contour Palette, it’s so versatile and I loved how quick and easy it was to use. The only thing I didn’t really like about it was that there’s no inside mirror, but that’s only in the small details. For €29.95, I think it’s worth every penny. Suzanne does it again 😀