Shimmering dry body oils: it’s a mouthful to say, but I’m not sure how I lived my life without something like this. They’re perfect for all year round because they shine under the sun and they’re perfectly shimmery in the Winter months leading up to Christmas. They’re an ideal finish for any going out outfit. Both Cocoa Brown and Bellamianta are still all over the tanning scene right now, seen as I’ve only ever used these two shimmering oils, I thought I’d compare them! 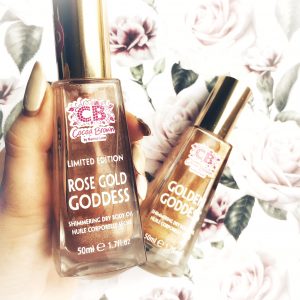 I think almost everyone must have tried Cocoa Brown’s Golden Goddess by now. It’s only €11.75 for a 50 ml bottle and lasts so long. It can be used all over the body and worn with out without tan. The pigment of this is insane, it’s basically like liquid gold with a huge amount of shimmer. So, a little goes an awful long way. Saying that, it makes it very easy to get carried away (can that even happen with highlighter?). You will basically be seen from space with this on. I usually put it on with a kabuki brush and it seems to spread it a lot nicer. 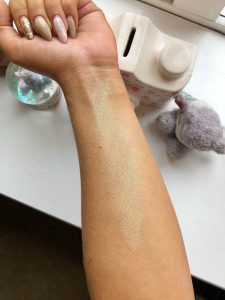 It’s not showing up the best in the photo here, but it’s fab on. For less than €12 you really can’t go wrong, and it comes in three different shades too. One thing is I don’t think it lasts as long as it should really. The pigment dies down after a couple of hours so it’s a lot more subtle. Another biggie is that the transfer is crazy, everything within your reach will be shimmering like crazy – so I wouldn’t advise it if you’re fond of white bed sheets! 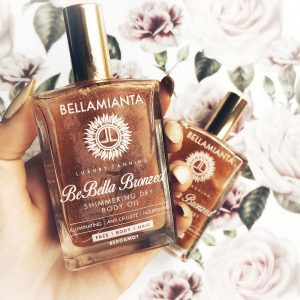 First off, I’m not sure why but I much prefer the packaging of the Bellamianta oil. But saying that, I much prefer the pump on the Cocoa Brown bottle, you shake the oil through a small hole at the top of this bottle. The Bellamianta oil is that bit pricier at €22.50 for 50ml, but it seems a lot more luxurious to be honest! The ingredients seem a lot more fan-cay too. It’s supposed to nourish the skin with ingredients like avocado oil, Buckthorn Extract, Vitamin E and lecithin (which is meant to help tone and firm the skin, as well help with cellulite). Bellamianta also makes it clear that their ‘BeBellaBronzed’ oil is vegan and free from (deep breath) parabens, GMO, alcohol, sulphates, and silicone. 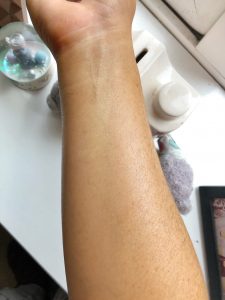 I’ve got a full review of Bellamianta products, here. They’re probably my favourite tanning brand right now, and I feel like I’ve been saying that for a long time now! 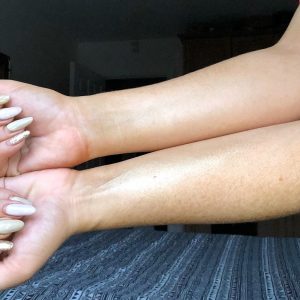 The Bellamianta oil smells AMAZING. I love the smell of Bellamianta products, I’ve gone through two of their signature scent candles and this smells the exact same. Amazing.

There’s also a big difference in the pigment of both oils. If you’re going all out, the Cocoa Brown one is probably best, but I love that the Bellamianta one can easily take you from day to night and that it’s buildable too.

I have to say that I do love both, but I’m slightly leaning more towards the Bellamianta oil. But I feel like if I was trying to decide on only buying one of them, it would all depend on how far I am away from pay day! If you want to keep it cheap, but sparkly, go for Golden Goddess. If you don’t mind paying a little extra for a bit more luxury, then go for BeBellaBronzed. 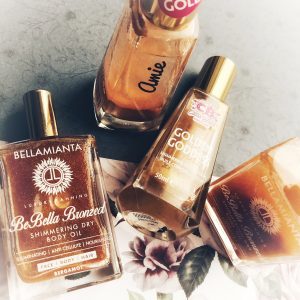