I’ve been using Declarē skincare for definitely over a year now and I’ve absolutely fallen in love with it! So, I was delighted when the lovely Karen from Declarē gave me the ProYouthing Trial Set about three months ago which was the perfect little set for full skin care. 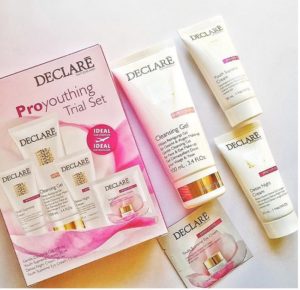 The set includes a cleansing gel, a ‘Youth Supreme Cream’, and a ‘Detox Night Cream’, as well as a tester of the ‘Youth Supreme Eye Cream’. I’ve also been using their eye serum and cleansing powder so I’m going to review them all here in the one post!

I’m really into skincare the past, probably two or three years, before that I just took off my makeup and threw on a bit of moisturiser every now and again. But now, I absolutely love skincare! I’d actually put as many different types of skincare on as possible ha! But it really does make such a difference when you actually take care of your skin, so there’s no going back now!

Starting off with the ProYouthing Trial set, it’s the perfect little kit if you don’t really have much of a skin care routine but wanting to get into it, or if you’re already a fan of taking care of your skin, either way it’s fab!

The kit has a day and a night cream, the ‘Youth Supreme Cream’ and ‘Detox Night Cream’. 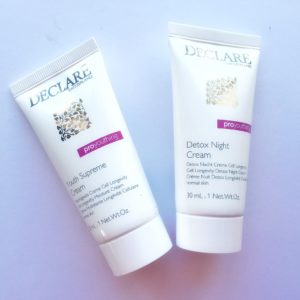 The Youth Supreme Cream (the day cream) feels super soft and is actually so refreshing! The idea behind it is to help preserve the natural youthfulness of your skin and delay signs of ageing. It has ingredients such as magnolia extract, pure silk extracts (how amazing does that sound?) and juvinity. It’s also suppose to help reduce the look of fine lines already on the skin. Obviously I can’t say that it helped me in this way, because I’m a bit young for wrinkles! But seemingly once you reach the age of twenty one, your skin starts to lose collegen which is what keeps it youthful looking, so obviously I’m going to start using products like this now to prevent it in the first place. But I have been using this cream for over three months now and I can see a difference in my skin that it’s much brighter and clearer (apart from those monthly spots if I’m being honest, but they can’t be helped unless I change gender ha!). My skin is a lot softer since I started using this each day too, because it’s so silky feeling it spreads over the skin really nicely so you only need the tiniest amount. I’ve been using the same 30ml bottle for the past few months and I still have plenty left! I absolutely love it. 😀

The ‘Detox Night Cream’ is pretty much the night version of the Youth Supreme Cream. It’s a small but heavier on the skin than the day cream, but the two of them go so well together and literally leave your skin so soft it’s unbelievable. Some of the ingredients are the same as the day cream, but then it has coconut oil, shea butter and macadamia nut oil. The ingredients in Declaré products always sound so amazing! 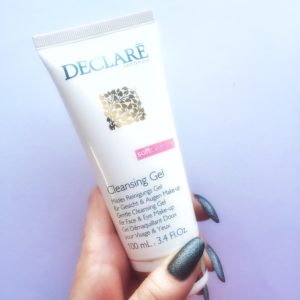 I love cleansers, I always think it’s better to double cleanse rather than just using the one cleanser so I always have a few there ready to go. The 100ml bottle lasts so long, I have another bottle of this that I have about 5 or 6 months and it’s still no where near the end. It’s perfect for taking off makeup and gets every last bit, although I don’t use it for taking off mascara or eyeliner because I only use actually eye makeup remover for that because I just think it’s easier. But for any makeup, eyeshadows even, this is a perfect cleanser and makeup remover! It’s a super soft gel and leaves your skin so soft after using it, there’s no tight feeling like I’ve had with other cleansers. It’s so handy to keep in the shower and it’s there for when you need it. 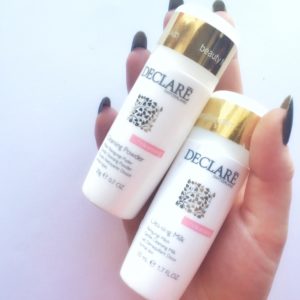 The cleansing milk is the one I’ve been using the longest, it’s a 50ml bottle and I’ve gone through about three at this stage. I love that this is a cleanser that can just be wiped off rather than needing water. I don’t think the cleansing milk is as good for taking off makeup, but it’s great to use as a second cleanse to make sure your skin is 100% free from any makeup. I’ve actually seen on Snapchat that Marissa Carter and Suzanne Jackson love this too. 🙂

The cleansing powder I was so excited to try because I never tried a cleansing powder before and the second I used it I fell in LOVE. It comes out as a powder (obviously!) and then mixed in with a small bit of water and foams into a lather. I use the smallest amount of powder and just mix with water and rub my hands together. This is 100% my favourite cleanser EVER. My skin is as soft as a baby’s each time I use it. This is one that I know I’m going to be using for years! 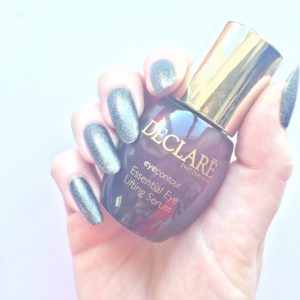 I tried out the eye cream that came with the ProYouthing set, but it was too small to try it out for long enough to review it properly, although it did feel fab when I did use it.

I’ve been using the eye serum for I’d say four or five months and I’m loving it. It comes with a small pump and there’s enough in one pump for both eyes. It’s a really nice consistency and feels so cooling and gentle going on. I have really sensitive eyes, so I love it to use for around my eyes but it didn’t go down well with my eyes when I used it as an eye makeup remover, I’m not sure if it’s because my eyes are super sensitive or why, but as long as I just use it as a gel for around my eyes it’s fab! It made any dark circles I had a little brighter, and it’s just perfect if you’ve any puffiness.

Out of all the Declaré products I’ve tried my absolute favourite is the cleansing powder, and then the day and night creams. I’ve still to try something from Declaré that I don’t love! They have such an amazing range and so much choice.

Beauty products that are worth another buy!