I’m all about being tanned constantly, all year round. Especially in December, it’s all about that glowww. I’m a massive Bellamianta fan, it could be my all time favourite. If not, it’s 100% in my top three. 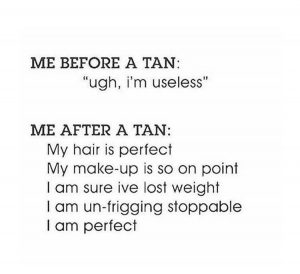 I was always a mousse kind of gal when it came to Bellamianta, even tan in general. Especially seen as the mousse was the dark shade. But then Bellamianta Dark Lotion came out and it changed everything. It’s v. hard to choose between the two, so I thought I’d go through both the dark lotion and dark mousse here. Right in time for ze Christmas party glow! 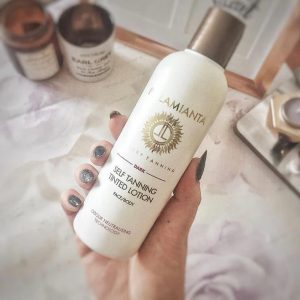 So the Dark Lotion is €24.95 (ish) for a 200ml squeezy bottle. That’s one thing I’m not mad about is that it’s a squeezy bottle, so when you’re running low it’s a bit hard to get any product out, and then you end up with way too much tan on your glove for that one white patch left on your arm. Nothing worse! But really, that’s only a small complaint.

Because I’m more of a mousse kind of gal I was a bit nervy trying this out but I loved it almost straight away. The guide colour is gorgeous, like if you had to you could get away with going out with the guide colour just an hour or so later. The lotion is super thick, almost like a gel but it spreads and blends so easily. It feels SO moisturising, like that it’s really nourishing your skin. The ingredients in it are meant to be fab too.

I usually leave mine on overnight and rinse it off in the morning and I just love the colour. A lot washes off, but it’s still quite dark after that. It also wears off fab, I think a bit nicer than the mousse actually! Although it’s a bit harder to take off compared to the mousse. It’s my go to tan at the moment for when I just need a fab tan. For nights out I usually go for two layers, just for that bit extra. I wore two layers for my graduation and it was ideal. 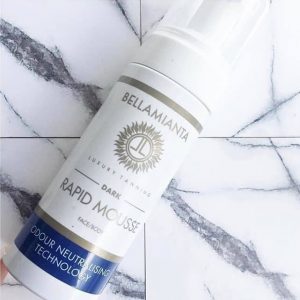 This has been my love from the start. I’ve been obsessed with this tan for what feels like forever. I’ve always preferred mousse tans and was only delighted when I tried this out. It dries super quickly, has a fab colour guide, wears off fab and isn’t hard to take off at all. I don’t think I’ll ever stop buying this. It’s meant to be really moisturising, although it does feel fab on, I think the lotion is that bit more moisturising. Probably just because of the texture.

It’s €22.95 for a 150ml bottle, so it’s a bit less than the lotion both in prize and size. Before I started using Bellamianta I was an avid Cocoa Brown user, but there’s such a difference between the two. You really get what you pay for.

The two are fairly similar, so it kind of comes down to whether you prefer mousse or lotion. Lately, I’ve been switching between these two tans. If I really had to choose, gun to my head – it’d probably be the lotion by, like, one percent. If you haven’t tried Bellamianta yet (where have you been?) or you’re already obsessed, it’s the perfect time to either give it a go or to stock up. The Christmas sets are SUCH good value, you’re basically getting a free tanning glove (which is also fab) and a mini instant tan free. So worth it.

There’s a small price difference between the two, and 50ml difference in the bottle size. So you’re probably getting a bit more value with the lotion!

Perfect Planners to Get Your Life Together!