Tan, tan, tan. I wear tan literally all of the time, like I’d have no problem leaving the house with no makeup on, but there’s not a chance of me even stepping outside my front door without wearing any tan. So obviously I do like a nice tan! I wore Wow Brown tan for my debs and I loved it. Then I moved to Carlow and couldn’t find it anywhere, so I forgot about it. Out of sight, out of mind and all that.. Wow Brown is an Irish tanning brand created by ‘Fran & Don’, so when I was asked would I like to try out Wow Brown again I jumped at the chance*. I was sent the ‘DIY’ in medium/dark and their ‘Ready to Glo’ in dark. I was so excited to try the dark liquid, I’m love a super dark tan. 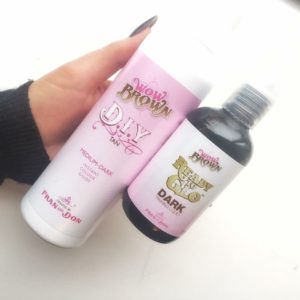 So the DIY bottle, which is the bigger 250ml bottle is a tanning lotion for both face and body. It claims that it has an instant colour guide, streak free, fast drying, lasts up to ten days and is boyfriend friendly scented. Most lads hate the smell of fake tan, most people even, but this tan actually smells fab. Even my mam asked what the lovely smell was one day when I was applying it. So they have that last one ticked anyway!

It’s super easy to apply because it’s a creamy kind of lotion, at first I thought I was using an awful lot of it but it blended really nicely. I don’t think it dried that quickly, even though it says fast drying it felt a bit sticky on for a little while after. I don’t think it’s the type of tan that you could put on and then wriggle into a pair of skinny jeans. But the colour is lovely, and it was still fab a few days later. I usually only leave my tan on for about three days and then start all over again. There’s no way this would have lasted  up to ten days on me, but once I see my tan fading I don’t keep it on because I like a dark tan constantly. It’d be great if you didn’t want to be a mahog colour all the time, because it has a really nice even fade. 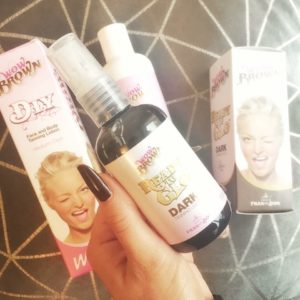 The darker shade comes in a 100ml bottle, Wow Brown describes the size as ‘flight and handbag friendly’. It says it has the same number of applications as the 250ml bottle, which is 7-10 full body applications. It can be used on both face and body and supposedly lasts 7-10 days. My first impression of this was that I didn’t like the squirt-y applicator, it felt as if it was soaking into the tanning glove. It has a light colour when it’s first applied, like the guide colour of the DIY one. It also spreads nicely and smells nice and fresh. I thought it dried a lot quicker than the DIY tan too, can you tell I prefer this one already? 🙂 A full body tan used down to almost the top of the label, but because it was my first time using it I think I used a lot more than I needed to because I felt it was soaking into the glove.

I left it on over-night and there was a very faint smell of fake tan the next morning, but that disappeared once I rinsed it off. The colour was amazing, like really, really fab. Although I would have liked it a small bit darker, especially on my legs, but tan doesn’t seem to come out as dark on my legs for some reason. Once I used it a second time it actually went on a lot better, but you do have to move quickly with it because it dries super fast. Here’s a pic (no filters on this one!) of a before, after application and then showered off eight hours later, don’t judge how pale I am please! 😀

Before, after application and 8 hours later 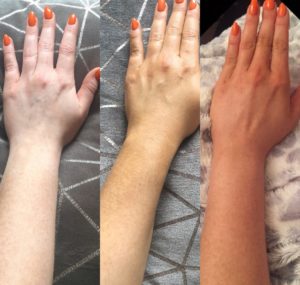